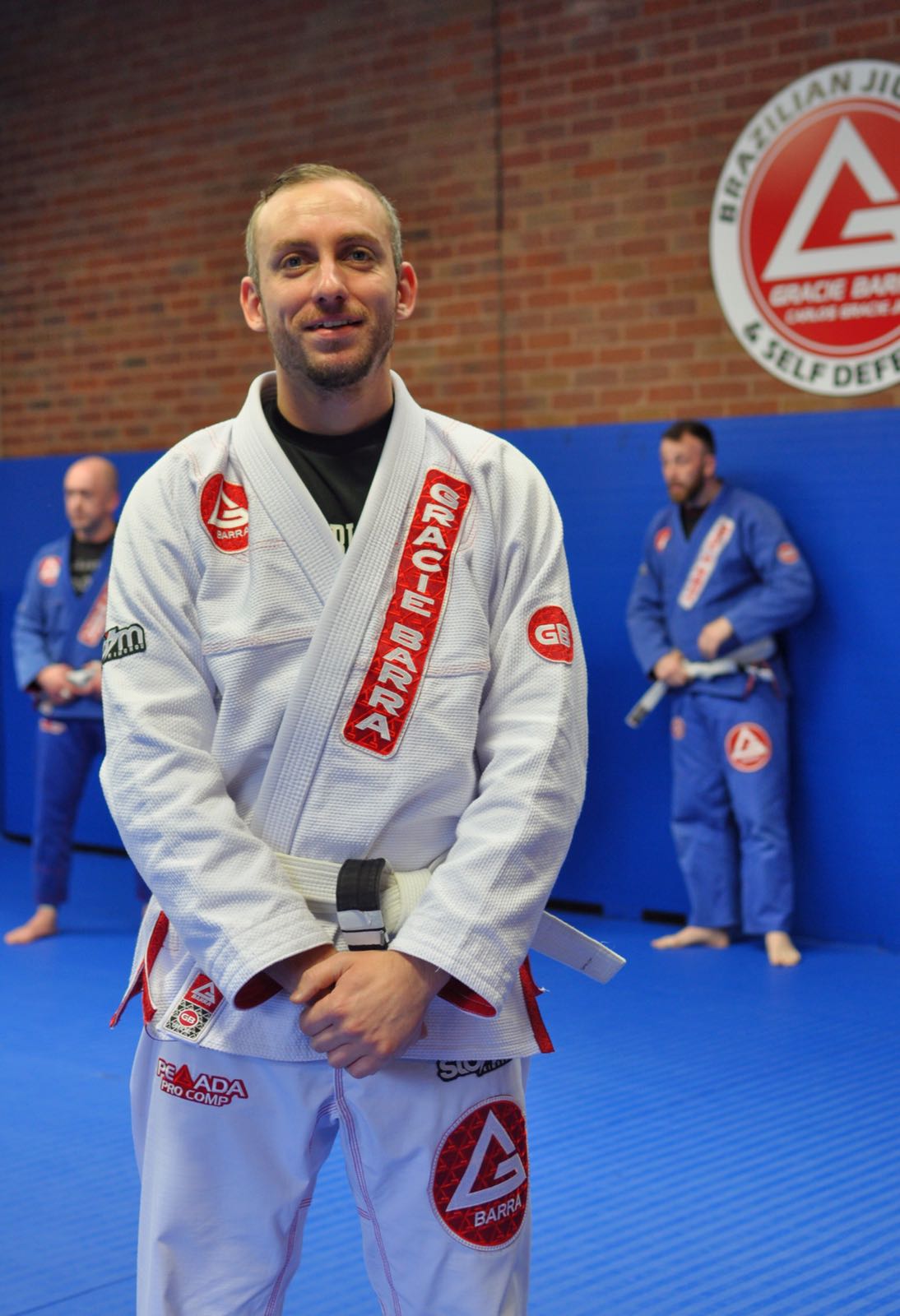 Meet Stuart. He started his Jiujitsu journey at GB Wolverhampton a few months ago and has embraced the Jiujitsu lifestyle and used it to help cope with his disorder and life challenges. This is his story…

“When I left the army I needed something to replace it, the excitement and challenges, I’m not the sort of person who like to sit around and watch TV I see it as a waste of time / life .
I wanted some of the aderline rushes I used to get and some of the phycal challenges to conquer and push myself, mentally and physically.

I started out doing karate at age 13 for just over a year but I felt it didn’t really suit me.
I was inspired again and wanted to do martial arts when my dad would use me to practice his Aikido on for his gradings. But at 18 I joined the army and didn’t have the time, but I knew I would again at some point.

At 26 I was medically discharged; from suddenly waking up one day with Tourette syndrome. (Tourette’s syndrome is a genetic neuropsychiatric disorder which usually manifests during childhood. Its main symptoms are involuntary physical and vocal tics intermittent, unpredictable movements and/or sounds. These tics may be chronic or transient) This meant that physically training presented different challenges to most people as physical stress can cause my body to result in more tics both motor and vocal which is very hard to explain to people who haven’t had much contact with the condition.
I didn’t understand it myself until it happened to me so I knew most other aren’t going to understand it.

So I knew it was going to be difficult to attend new classes as there’s a high chance someone in the room might get offended. I have lost jobs in the past from my condition so I really didn’t want to be let down again by it at something I wanted to learn like Brazilian jiu-jitsu.

One of the things I liked about first entering Gracie Barra was the initial form to fill out. It makes it easier to list any problems/medical conditions you might have as well as future targets and goals. This made it slightly less embarrassing for me personally as I knew it would be passed around the coaches saving me having to explain myself to all of them individually; as it’s extremely embarrassing walking up to someone for the first time and saying ‘Hi I’m new, don’t get worried or offended if I swear or give u a gesture!’ as it’s got to be the worst introduction of yourself ever. Imagine walking up to someone and saying hello then straightaway having to explain your embarrassing medical problems. Very awkward. To be honest the way everyone delt with my disorder has been way better than expected. I’ve never felt that I’ve been embarrassed or excluded from the group or felt that I’ve held anyone back from trainning.
The fact that some of the students and coaches have had some form of laughter from it put me at ease. Their humour means they’re not upset or angry towards me and at least my issue has a positive response.

I’ve found as new student’s have started at the school the coaches have explained to them not to be offended by my outbursts or comments which saves me the embarrassment of walking up to them and going through what I mentioned before.

Gracie Barra’s Jiujitsu for Everyone rings home true to me and I’ve witnessed others with worse problems like missing arms and legs still managing to participate in the sport and enjoy which is brilliant as no one wants to feel redundant, left out or no good.

Previously training Aikido I noticed big holes in the art and I wanted to fill the gaps, there really isn’t any ground work plus many situations Aikido just wouldn’t work. Jiujitsu really complements my Aikido. It’s funny. I started out really favouring Aikido and now if I had to choice out of the two I’d pick Brazilian jiu-jitsu every time.

It’s kinda funny when I look back as I use to mention to some of the Aikido guys that I wanted to train BJJ and one guy told me that it was full of tattood bullys looking for a fight – which is very funny as I think it’s quite the opposite. I’m glad I didn’t listen and gave it a go as right I couldn’t image my life without Jiujitsu.

The guys that teach and train at Gracie Barra Wolverhampton are honestly some of the nicest people I think you’ll ever meet under one roof. I truly believe the bonds we have building there are stronger than ones I built up in the army and the brothers in arms concept is well instilled at GB Wolverhampton.

From training at GB I know my confidence has grown as when I did my last grading at Aikido my instructor commented it was an excellent grading which is because at Gracie Barra they instill self confidence as well as self defence which I know is the reason why I’m finding life’s challenges easyier to manage and be more successful in.

I see Aikido and BJJ principles as the same; controlling your attacker/opponent and at the same time giving you options of how to deal with the situation. You can give your attacker the option to stop what there doing so they don’t get hurt anymore and subdue the situation. In striking arts the problem is the lack of control over your opponent as they say “who ever controls the distance controls the fight “. In hospital you always see the guy with the broken jaw and the guy next to him with the swollen hand who hit him so basically no one wins.

Imagine an art where this doesn’t happen and both parties can walk away, both reasonably unscathed and managed to come to an agreement without the trip to the hospital.

When I left the army I said to myself I’d never run again as I was made to daily. But since I’ve been training and seeing my fitness as one of my weakness I’ve got straight back into it, even got a weighted skipping rope and next on the list is the pull up bar.

Brazilian jiu-jitsu has inspired me to get into shape and even diet and look after myself – ditching the ready meals and fast foods. The unhealthy lunch box is gone and now it’s wholegrain, fresh fish, stir fry and fresh vegetables. While crisps, chocolate, milk and butter have been given the sack. I know the diet sounds horrible but it’s actually brought alot of better health benefits, more energy and feeling stronger, more alert and fresh foods taste better while also helping me getting back into the kitchen which I enjoy cooking – especially when I know it’s good for me.

I started the diet very recently as I entered my first competition and realised I was carrying way too much fat which put me at a disadvantage – so it inspired me to make a change I cut 3 kg in just under 2 weeks to go from middleweight to lightweight.

I’m really happy with the way I look now too so the diet and exercise are hear to stay. I’d be crazy to back on it all now.

I like the fact I have targets to aim for now as alot of these changes I’ve made so I can hopefully win a medal at some point. The competition is pushing me to become more healthy, fitter and determined person. I know it’s not the case if I will win a medal, but now just a matter of when”