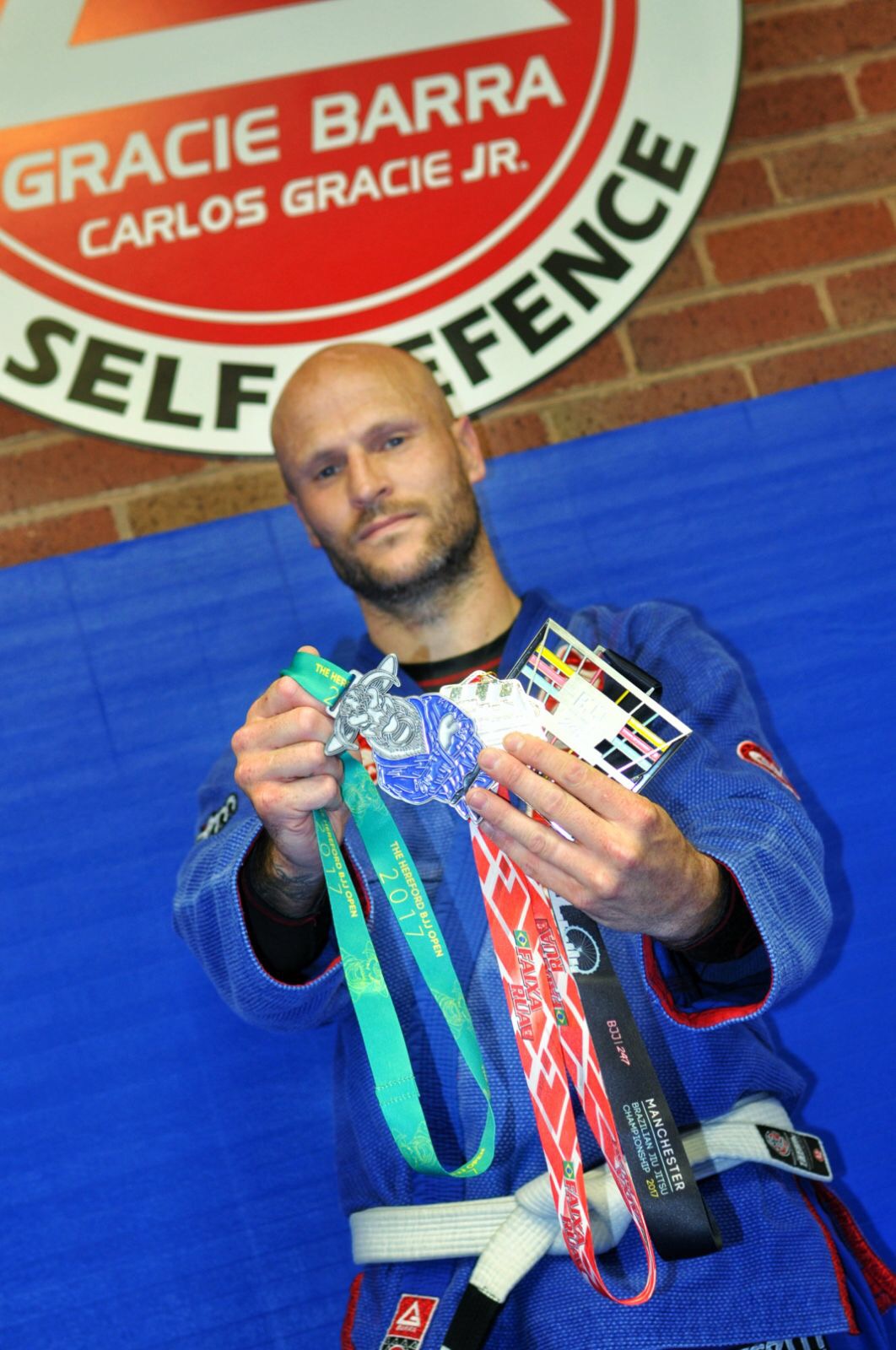 “I first started looking into Brazilian Jiu jitsu because I wanted my son to start as soon as he is old enough as I am a big believer in kids needing to be pushed both physically and mentally and in my opinion taking part in things that are difficult to do will help ground him and instil a work ethic at a young age.

I thought as my son would be doing it I should probably have an understanding of it too, so I started to look around for clubs. I first got pointed to another club in Wolverhampton but their main focus seemed to be kickboxing but I thought I would give it a go anyway. After attending for a few months and experiencing the instruction I quickly realised this club wasn’t for me. There was no sparring allowed for white belts to practise the techniques we were being shown and a completely impersonal approach to the students, after 3 months none of the instructors knew my name even though I was attending lessons 4 times a week!

I started searching for other clubs and after speaking to people within the Jiu jitsu community there was one clear recommendation GRACIE BARRA !!!

After speaking to the head coach or Professor as I now call him I was told to come along watch and give it a try. The first time I watched there was a lesson being taught by Braulio Estima who is a multiple world champion and I was blown away. I have since come to learn guest instructors of an extraordinary high level is a regular occurrence at Gracie Barra Wolverhampton.

I attended my first lesson and was hooked . Both the level of instruction and the way the techniques were broken down so even someone with zero experience like me could take it on board and give it a go was outstanding, and the instructors knew me by name at the end of the first lesson.

I’ve since became a full member of the Gracie Barra Wolverhampton team and my only regret is that I didn’t do it sooner.

The Gracie Barra Wolverhampton team are among some of the most down to earth, supportive people I ‘ve met and just so happen to be awesome at Brazilian Jiu jitsu too.

Since joining I ‘ve competed in 3 competions and won a silver medal and 2 golds, which has come from hard work on the mats but mostly from exceptional instruction and excellent training partners.

I would recommend Jiu jitsu and Gracie Barra Wolverhampton to anyone interested in improving fitness, confidence, mental strength but most importantly creating lasting friendships with people who you grow and learn alongside both on and off the mats everyday.

I began my Jiu jitsu journey at a late age of 37 in October of 2016 and in that short time I would say I’ve been involved at the 2 ends of the spectrum of Brazilian Jiu jitsu with Gracie Barra Wolverhampton, far out stripping my other experience by a massive distance.

No matter what your age, sex or physical condition Gracie Barra Wolverhampton can and will improve you as a person.

I can’t wait to get my son involved and surround him with the kids, parents instructors and senior team of Gracie Barra Wolverhampton as I firmly believe only positive things can come of it.

I am very proud to say I am a member of the Gracie Barra Wolverhampton team and that I can call all our members and instructors friends.”

Dave Lockwood is an active competitor and dedicated student. For anyone wanting to chat more to him pop in any night and he’s sure to be on the mat.